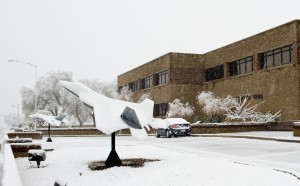 Holloman Air Force Base was established in 1942 as Alamogordo Air Field six miles west of Alamogordo, New Mexico, it was renamed in 1948 in honor of Col. George Holloman, a native of Rich Square, North Carolina and pioneer of early rocket and pilot-less aircraft research. The base was named in honor of Col. George V. Holloman, a pioneer in guided missile research. It is the home of the 49th Wing (49 WG) of the Air Combat Command.(ACC).

The United States Air Force will be a trusted and reliable joint partner with our sister services known for integrity in all of our activities, including supporting the joint mission first and foremost. We will provide compelling air, space, and cyber capabilities for use by the combatant commanders. We will excel as stewards of all Air Force resources in service to the American people, while providing precise and reliable Global Vigilance, Reach and Power for the nation.