The slogan tells it all: “We make things happen within the Great Place”

Have you ever heard the famous saying… everything is bigger in Texas? Well, Fort Hood is not exception!  This base It is the largest active duty armored post int he United States Armed Forces. 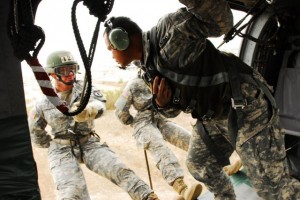 It is often called  The Great Place because the quality of life offered on post is considered one of the best. Soldiers assigned to Fort Hood  have new housing, quality medical care, thriving communities, great school system and various recreation opportunities available.

Fort Hood covers a total of 340-square miles and supports multiple units, a corps headquarters and a robust mobilization mission. It also meets the training and support requirements for many smaller units and organizations, therefore maintaining a vital defense force for the United States of America.

For everyone who enjoys the outdoors, The Great Place is the ideal location, because of warm winters and hot summers. The nearby lakes, Belton and Stillhouse, offer year round outdoor recreation activities.

Fort Hood also captures the attention of the entertainment industry and is the frequent host of celebrities, entertainers and theatrical shows from national dance teams. There are also many opportunities to enjoy the Central Texas atmosphere at Fort Hood, as local talent is frequently performing at Fort Hood clubs.

The Directorates comprising the Garrison Command perform the daily but vital support missions. The Directorate of Logistics performs or oversees supply, transportation, general support maintenance beyond the 13th Support Command’s capability for all units. The Directorate of Public Works plans for new construction, administers housing on the installation, protects the environment, maintains existing buildings, roads and grounds.

The Directorate of Community Activities performs all manner of Morale, Welfare, and Recreation functions that support soldiers and their families. The Directorate of Resource Management monitors the expenditure of funds for tenant units as well as the Directorates plus manages the size of the workforce. The Directorate of Contracting oversees the development, awarding, and execution of contracts for goods and services. The Garrison Chaplain administers the spiritual life programs ongoing installation wide.

III Corps’ colorful history dates from 1918 when the Corps served in World War I, winning battle streamers for the Aisne-Marne, Lorraine and the Meuse-Argone campaigns.

Inactivated in 1919, the Corps was reactivated in 1940 to train combat divisions. During World War II the Corps was deployed to The European Theater of Operations and earned the name “Phantom Corps” by hitting the enemy when and least expected. It won campaign streamers in Northern and Central Europe and established the Remagen Bridgehead, enabling the Allies to secure a foothold in Germany.

For many years, the primary focus of III Corps was the reinforcement of NATO. As the world and the U.S. Army have changed, III Corps has also changed and broadened it’s focus to be ready to deploy anywhere, anytime and win.